We spent three days in Bratislava in the scope of the Resonances project to explore the collections of local archives that preserve the most important documents of the international relations of Slovak art in the 1970s.

First, we visited the archive associated with the art collection of the First Slovak Investment s. r. o., managed by Zuzana Bartošova since 1993. The collection, which focuses on ‘unofficial’ Slovak art between 1960 and 1990, was already on show in Budapest in 2005 at the Ernst Museum’s exhibition. The collection’s archive is comprised of documents from Zuzana Bartošova’s own activities as curator and art historian. This included the series of exhibitions titled Rezonancie, which can be regarded as a forerunner of our project, and it involved international exhibitions compiled between 1997 and 2001 on the basis of the publications and recommendations of invited Eastern and Western European art critics. The archives include a number of album publication, a genre representative of the period, featuring limited edition prints of a wide range of artists as well as unique publications compiled from the work of the Terén artist group (Artprospekt P.O.P. – Ladislav Pagáč, Viktor Oravec, Milan Pagáč, Róbert Cyprich, Ľubomír Ďurček, Michal Kern, Július Koller, Vladimír Kordoš, Matej Krén, Radislav Matuštík, Peter Meluzin, Dezider Tóth, Jana Želibská), active between 1982 and 1987.

We then received a welcome at the exhibition space of the Július Koller Archive by Daniel Grúň, curator and researcher of the organization. Július Koller (1939-2007) is an internationally renowned artist of Slovak conceptualism, involved in several Artpool projects in the 1990s and 2000s. The archive manages part of Koller’s estate, while other parts have been transferred to the archives of the Investment s. r. o. and the collection of the Slovak National Gallery. The archive’s exhibition program presents projects by invited international contemporary artists working on different aspects of Koller’s legacy. The exhibition Unforeseen Forces of Occulture (U.F.O.) by Technologie und das Unheimliche, a group founded by Márk Fridvalszki, Zsolt Miklósvölgyi and Márió Nemes Z., had opened prior to our visit.

A selection from the archive had been prepared for us to view, including international correspondence, notebooks with Július Koller’s reactions to current events, and handwritten copies of foreign exhibition catalogues and publications of art and theory. Difficult to obtain in the period, these publications were passed from hand to hand in Bratislava’s artist circles: Koller ‘copied’ the borrowed publications into notebooks: texts in excerpts or word for word, illustrations in the form of sketches.

We also visited the City Gallery, where we met the institution’s curator Mira Keratová, who showed us a retrospective exhibition of Peter Bartoš . In 1972, Bartoš had participated in a meeting of Czech, Slovak and Hungarian artists organized by László Beke at György Galántai’s Chapel Studio, and many of his conceptual works thematized the cultural cohesion of the Central and Eastern European region and utopian models of a harmonious relationship between nature and culture.

Finally, we got a glimpse of the collection at the Slovak National Gallery’s storehouse. We looked at the documentation of two important art projects. The first was the Open Studio exhibition, held in 1970 at the studio of Rudolf Sikora, where 19 artists presented performative installations and actions. The other was Peter Meluzin’s chronicle “UFOotbal” (1981), in which he had collected documentation of self-ironic Fluxus-inspired football sessions with his artist friends, including Július Koller and Robert Cyprich. 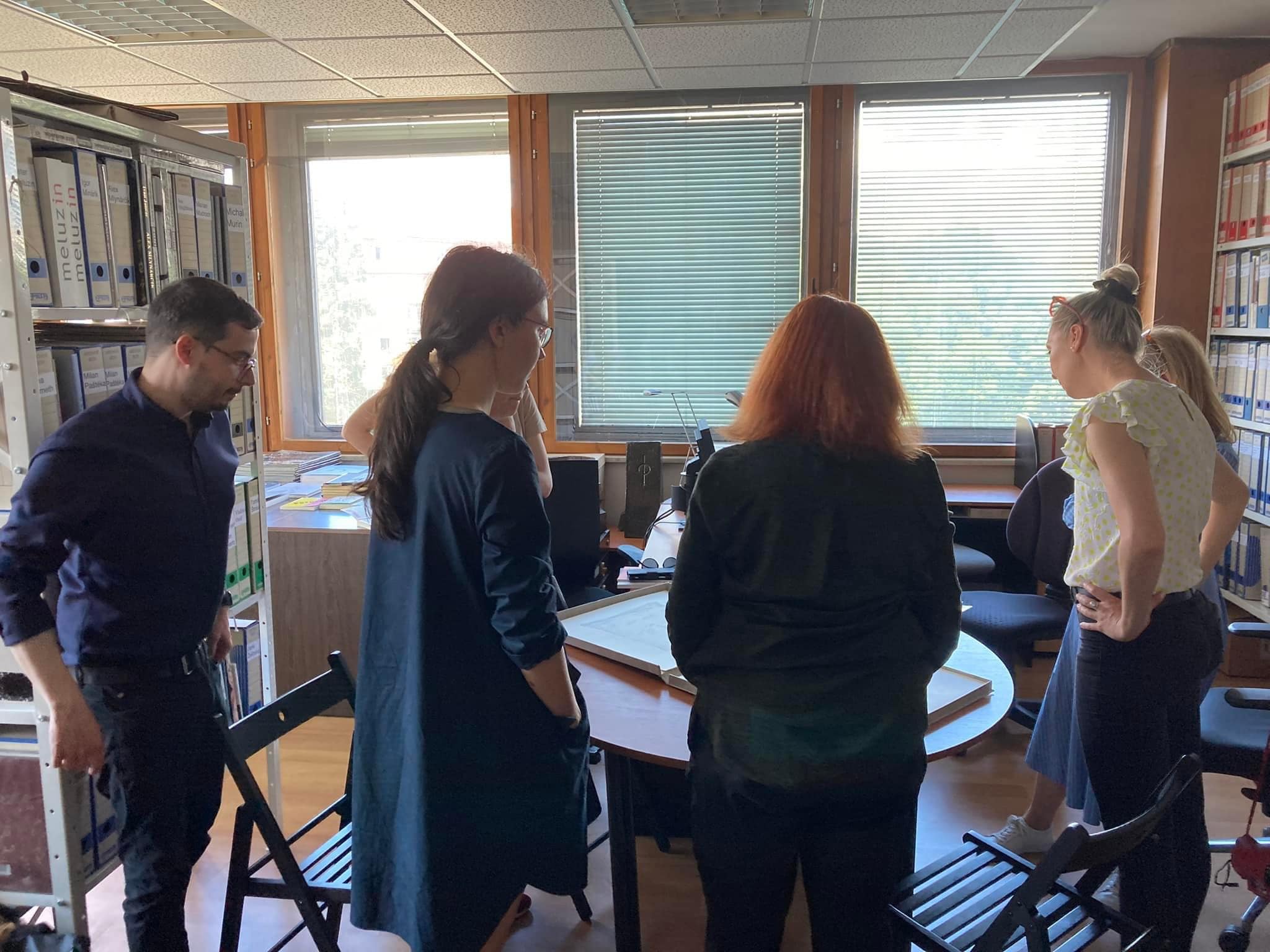 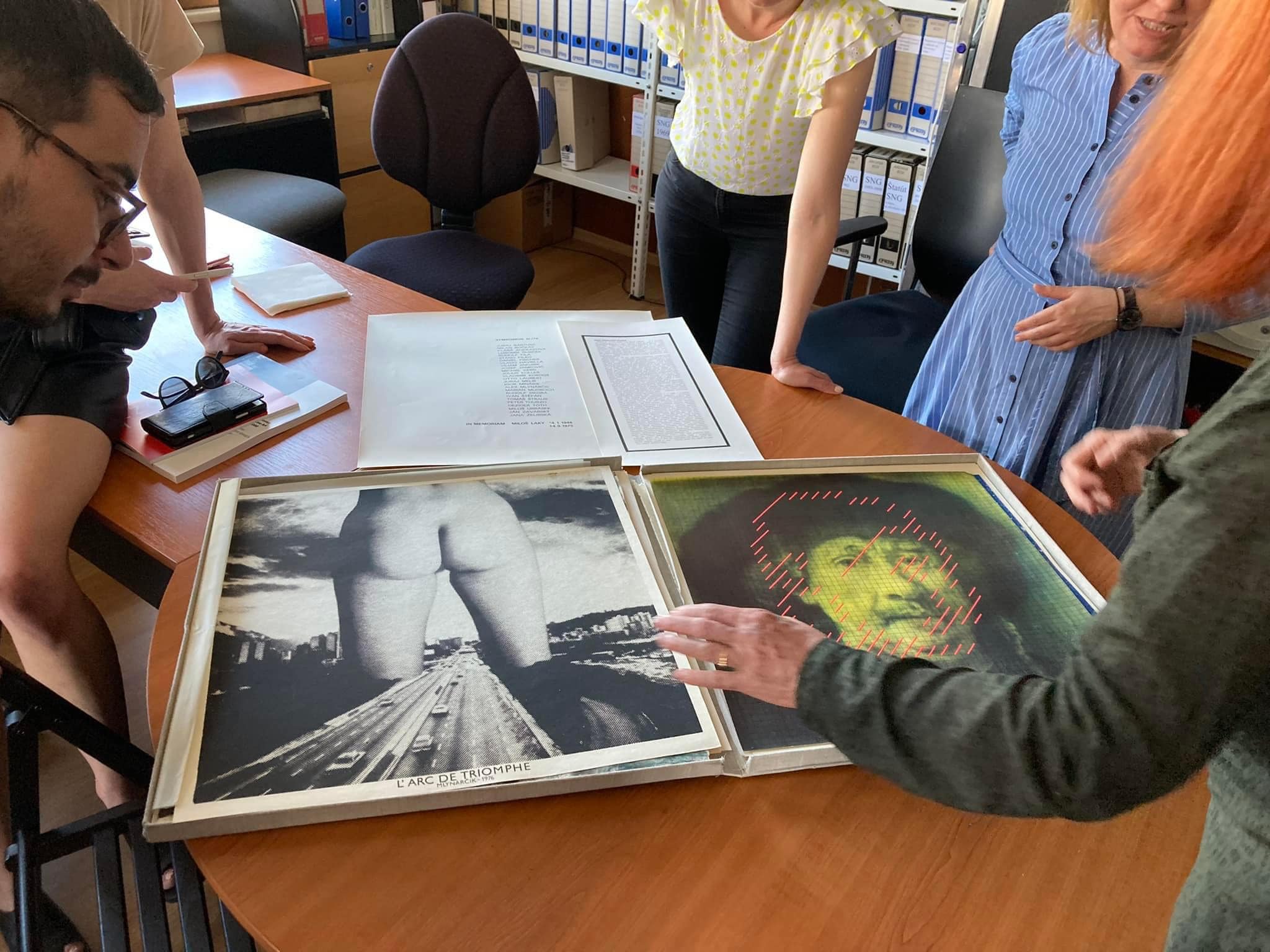 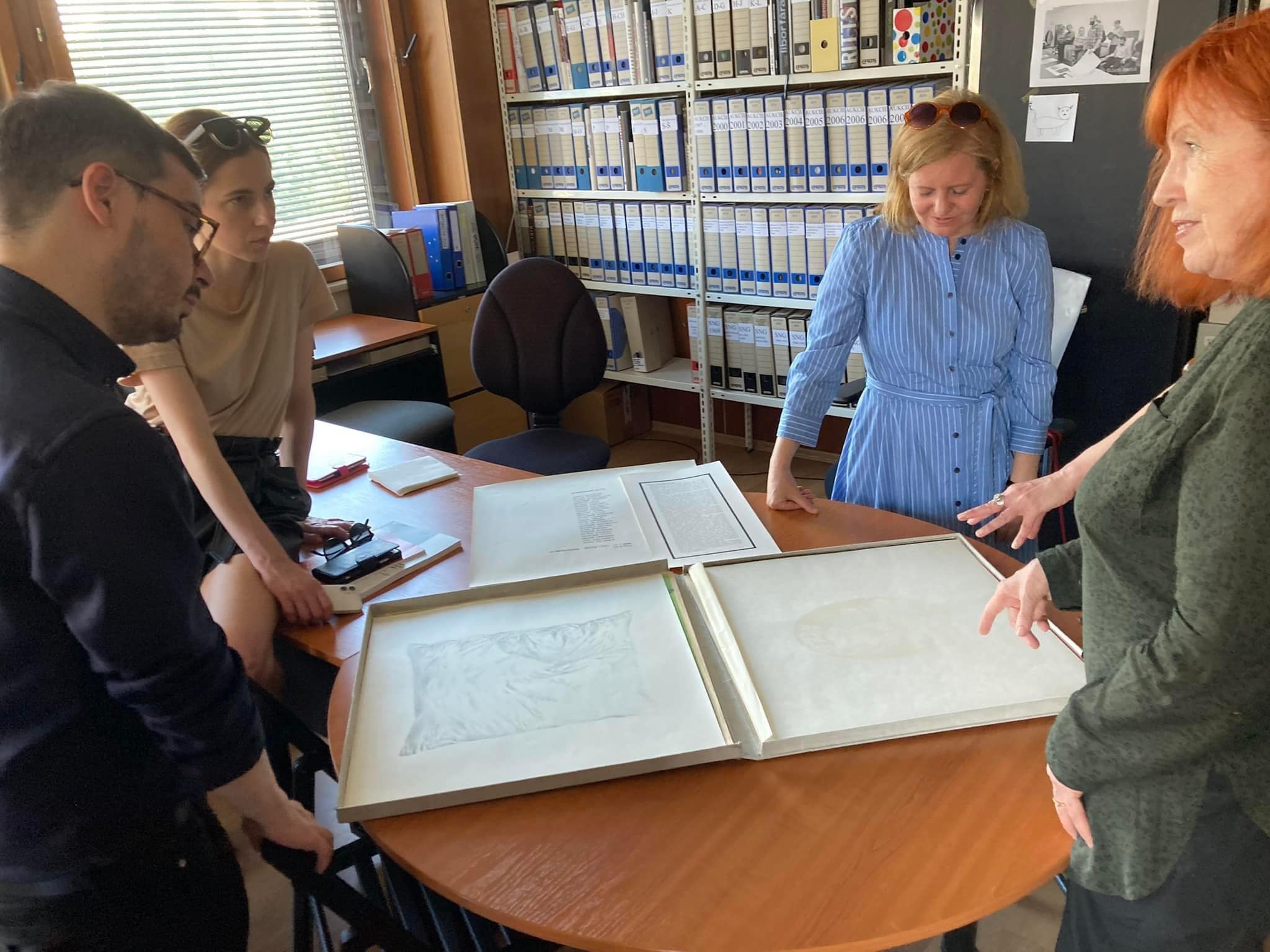 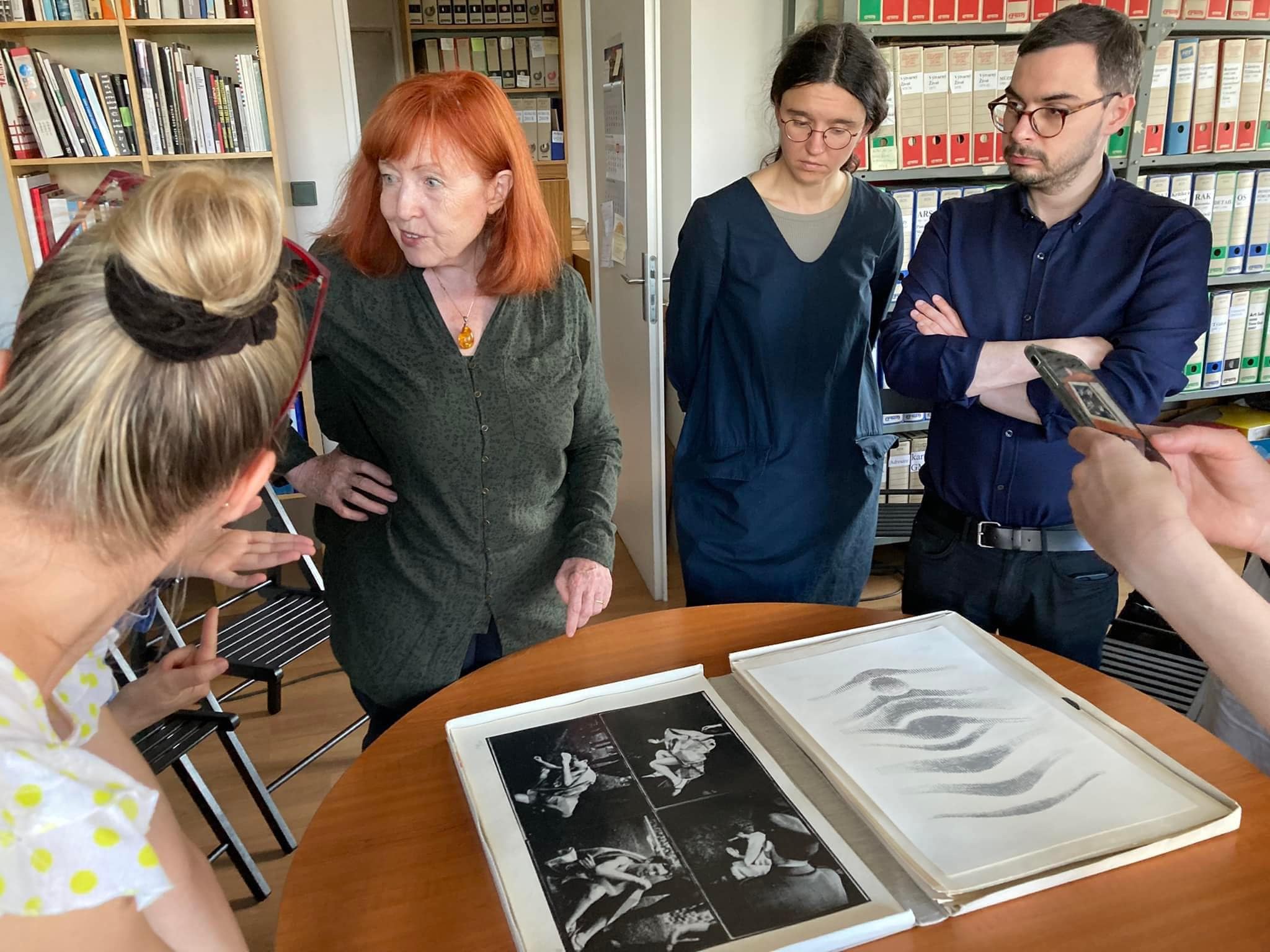 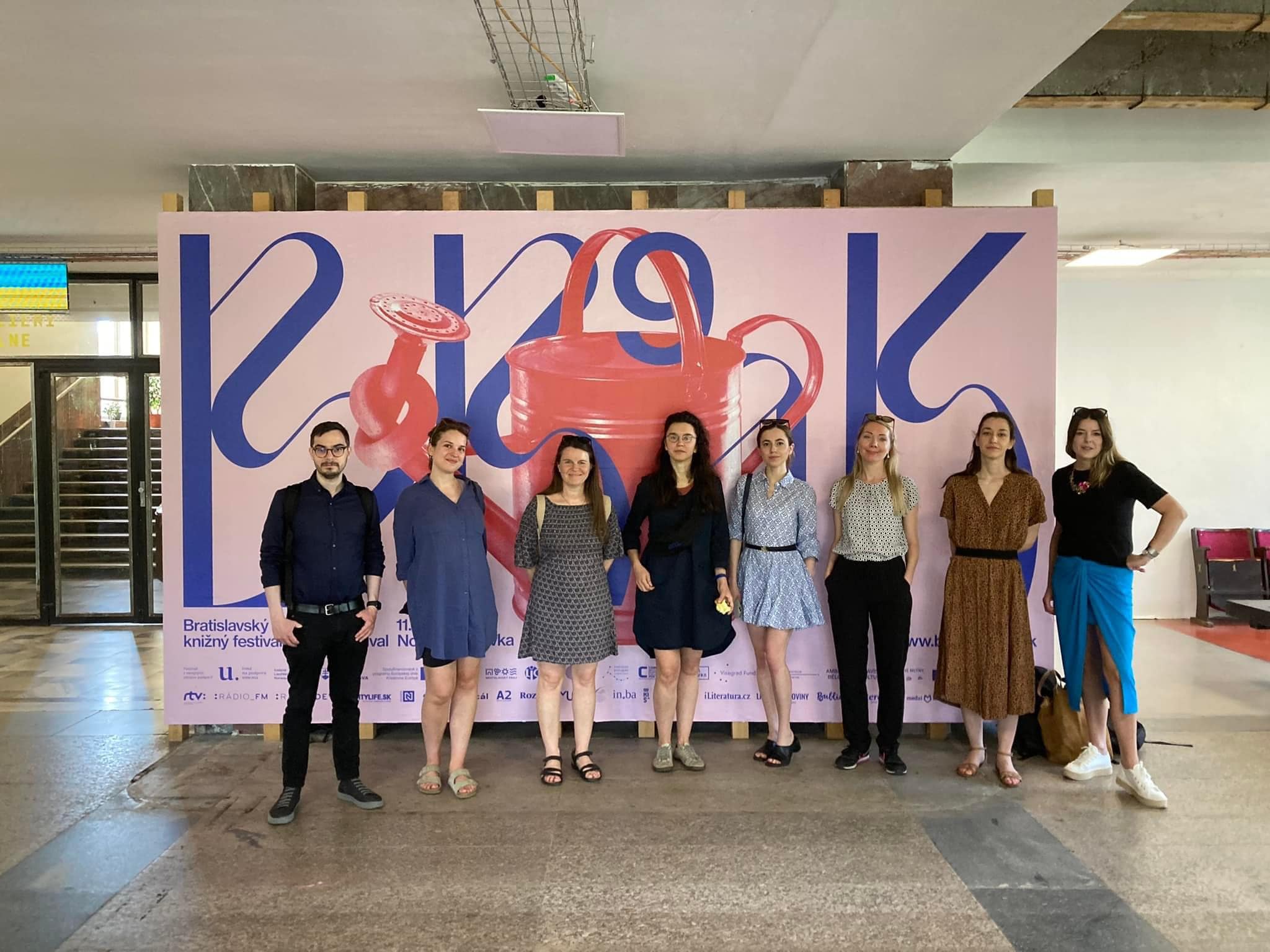 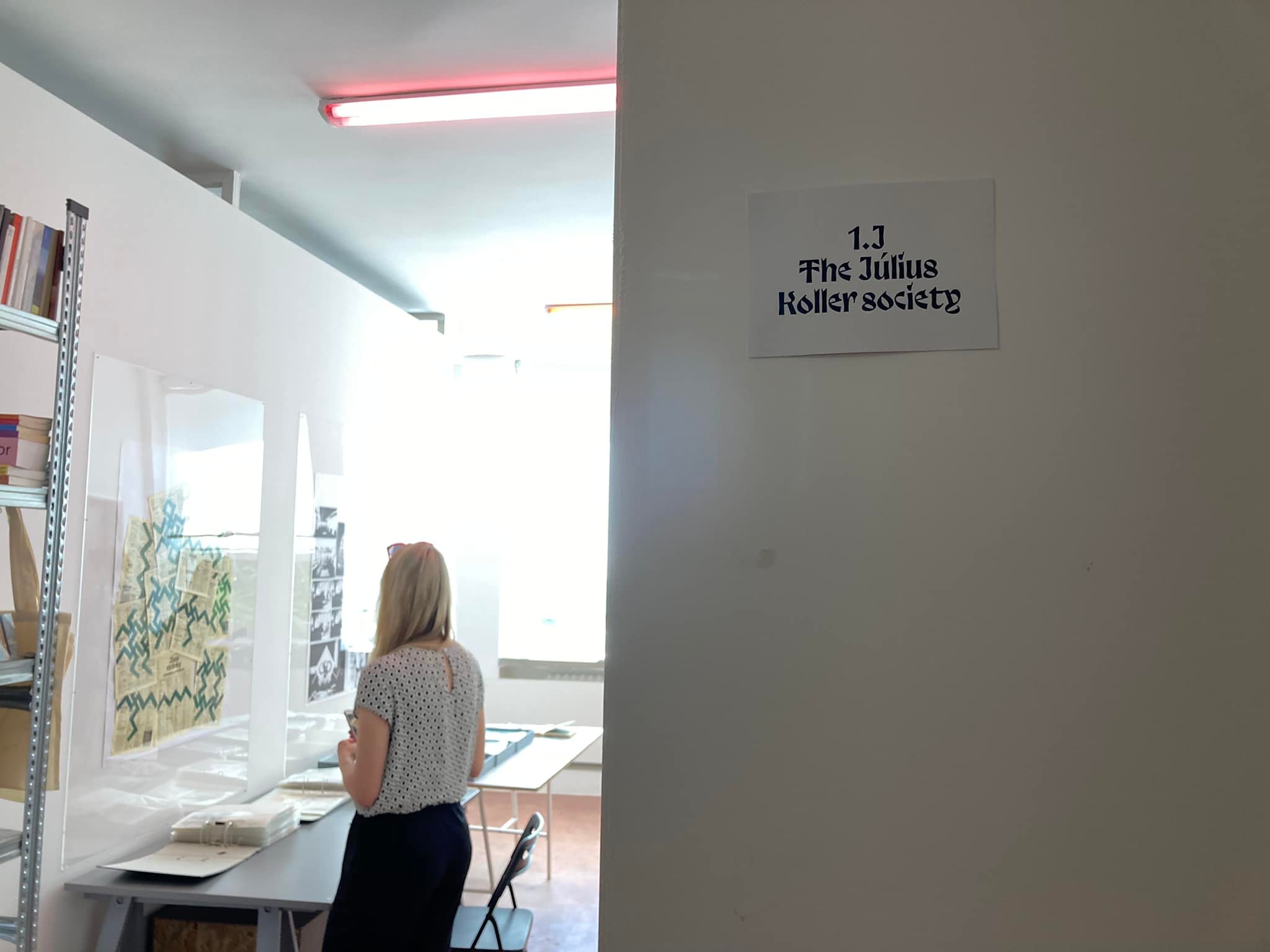 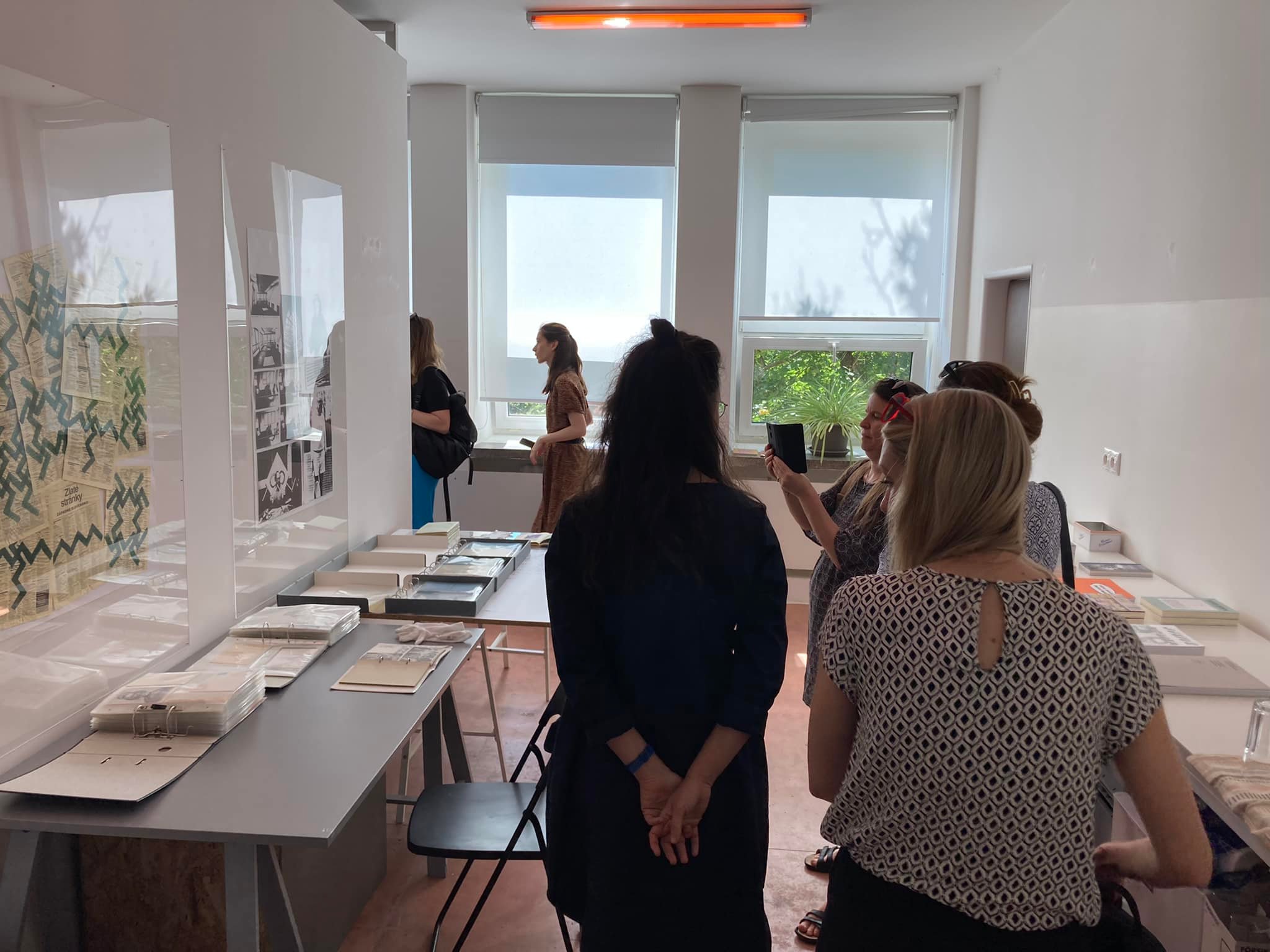 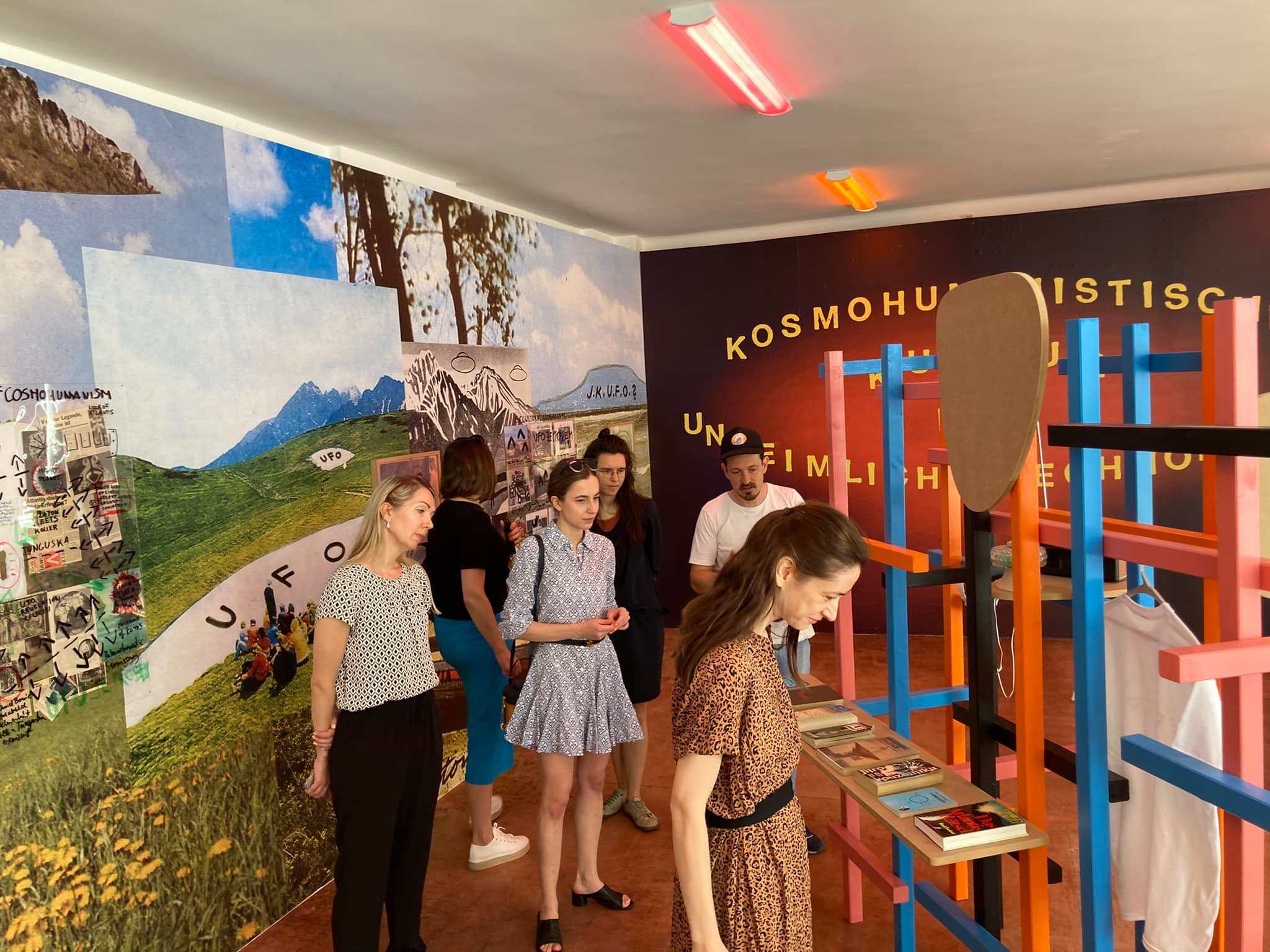 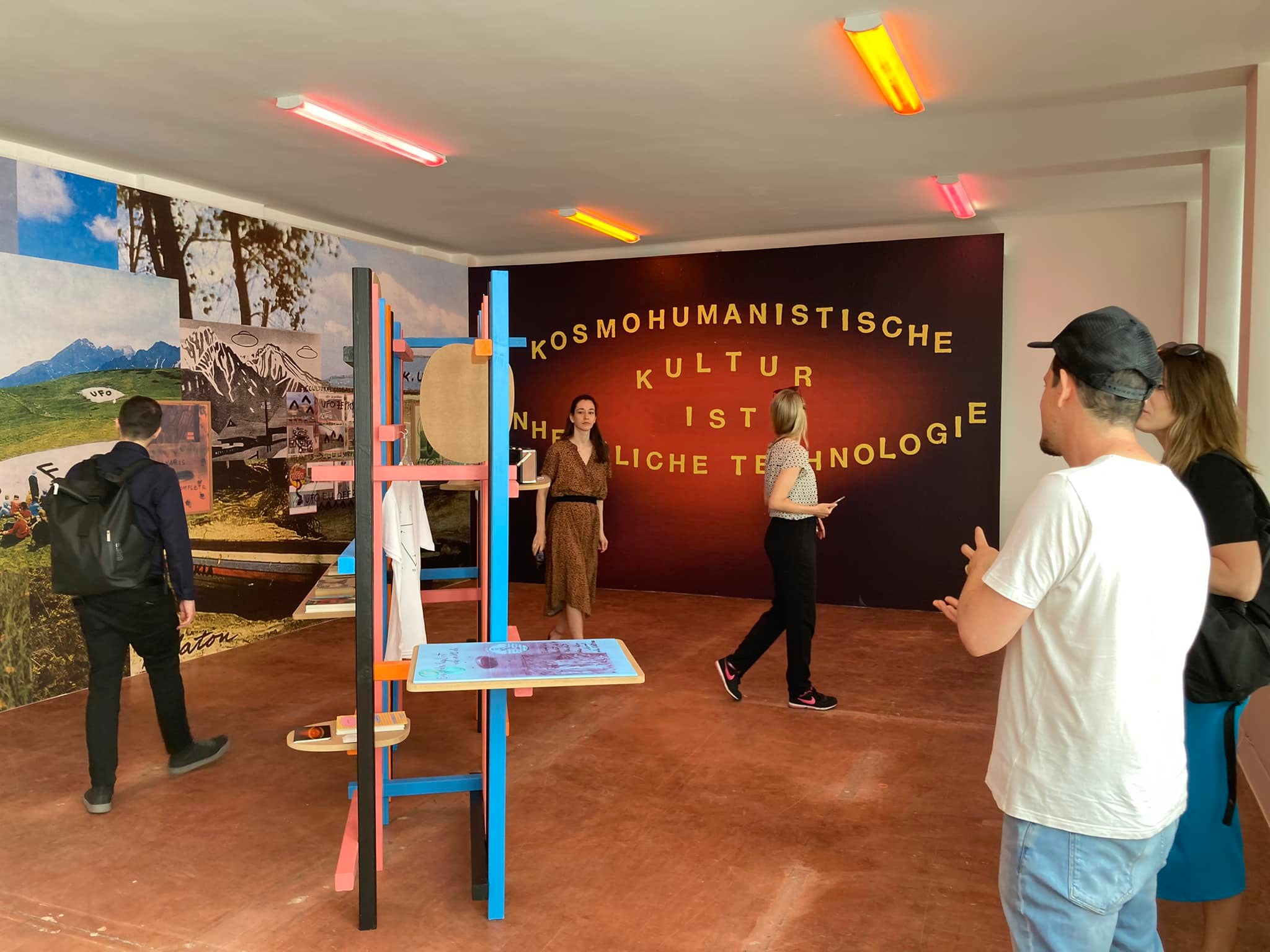 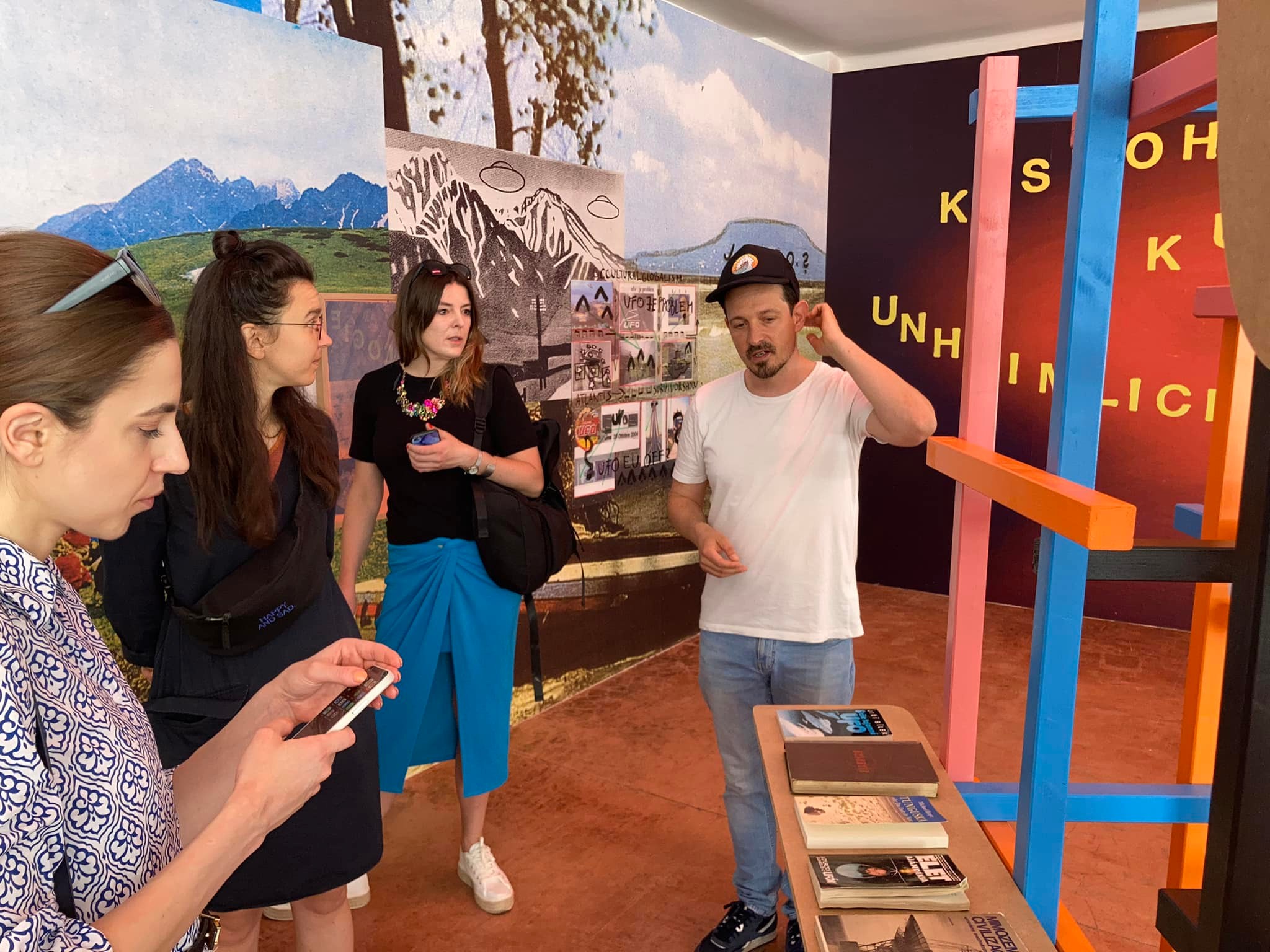 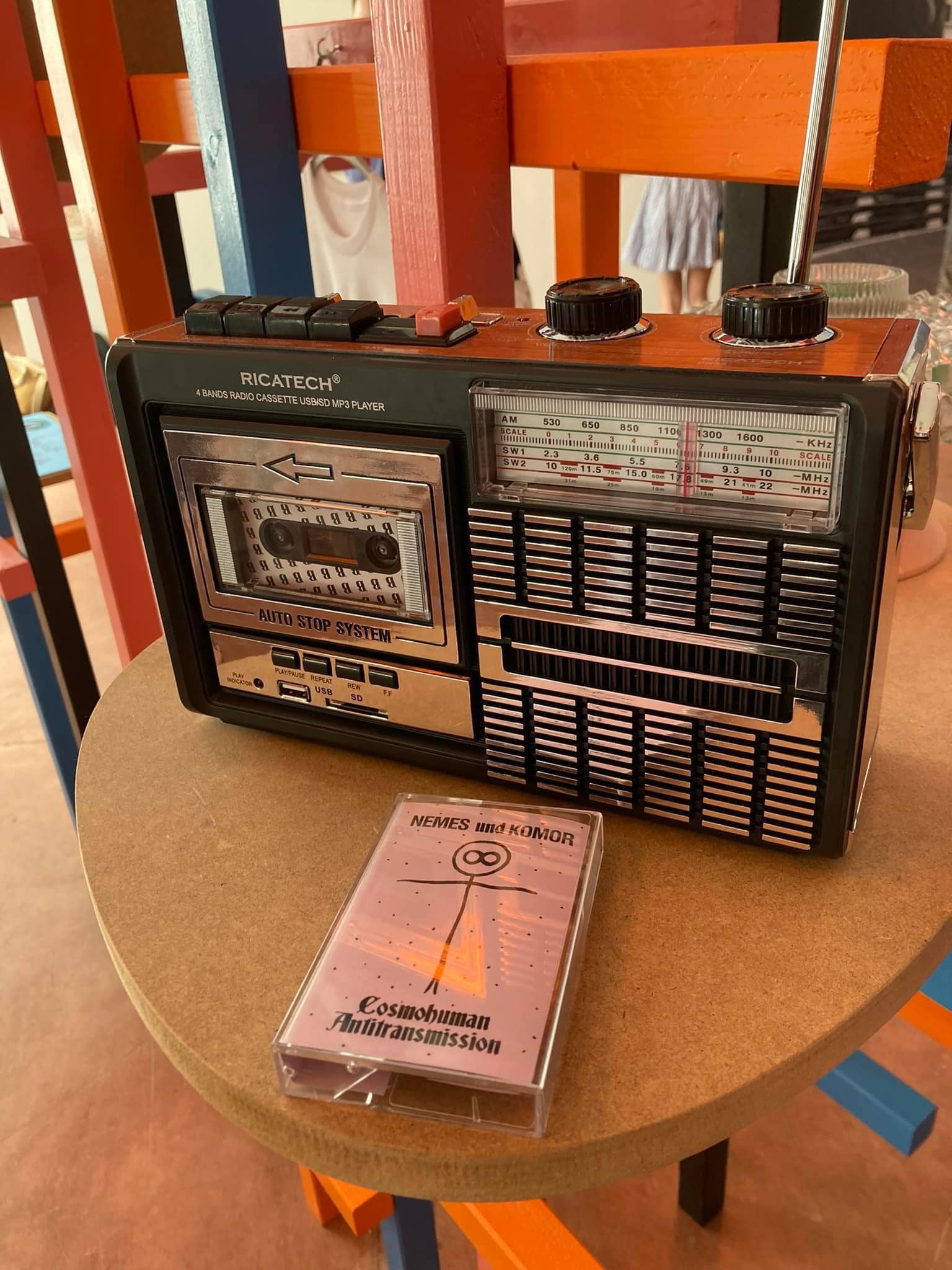 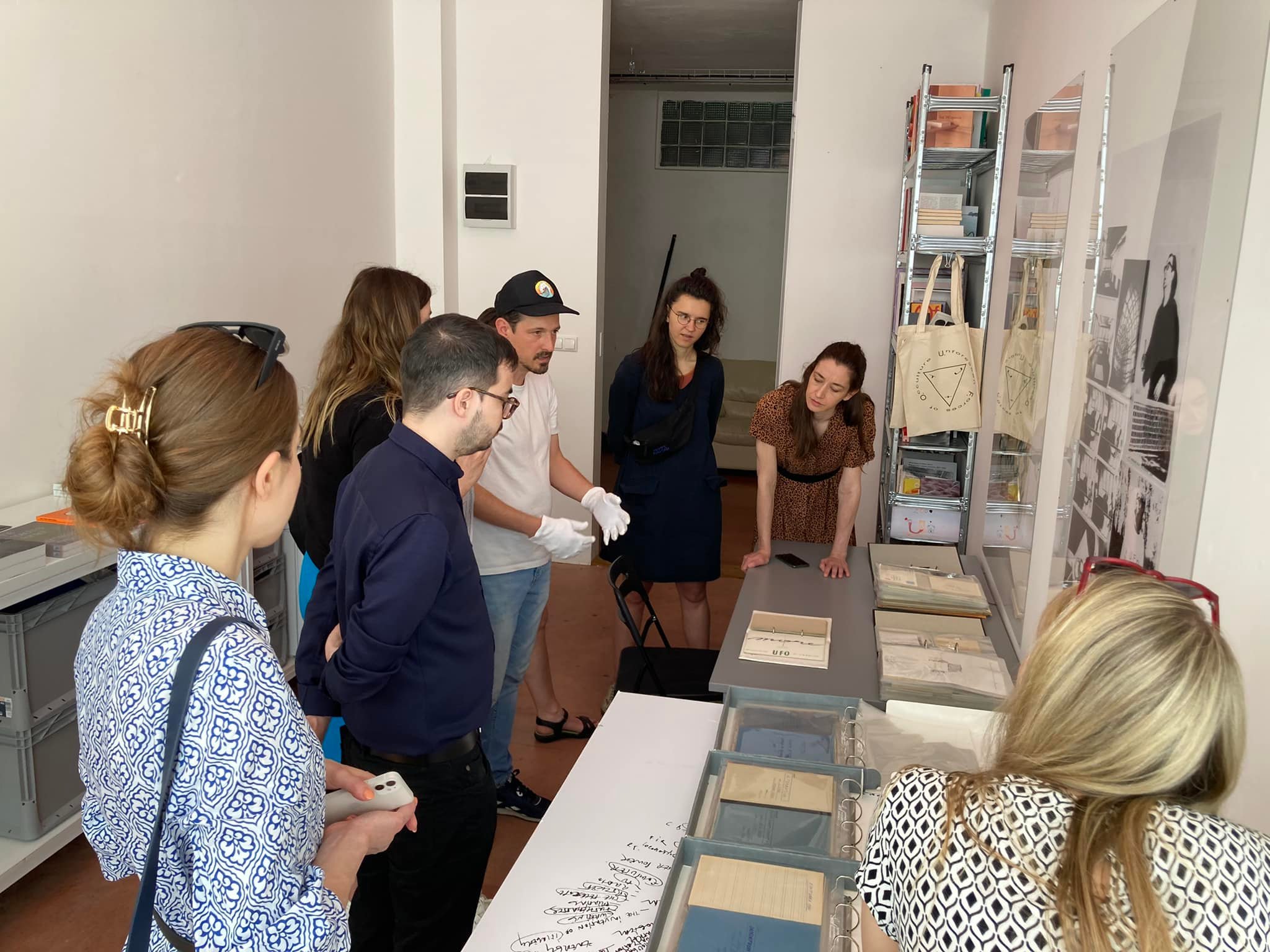 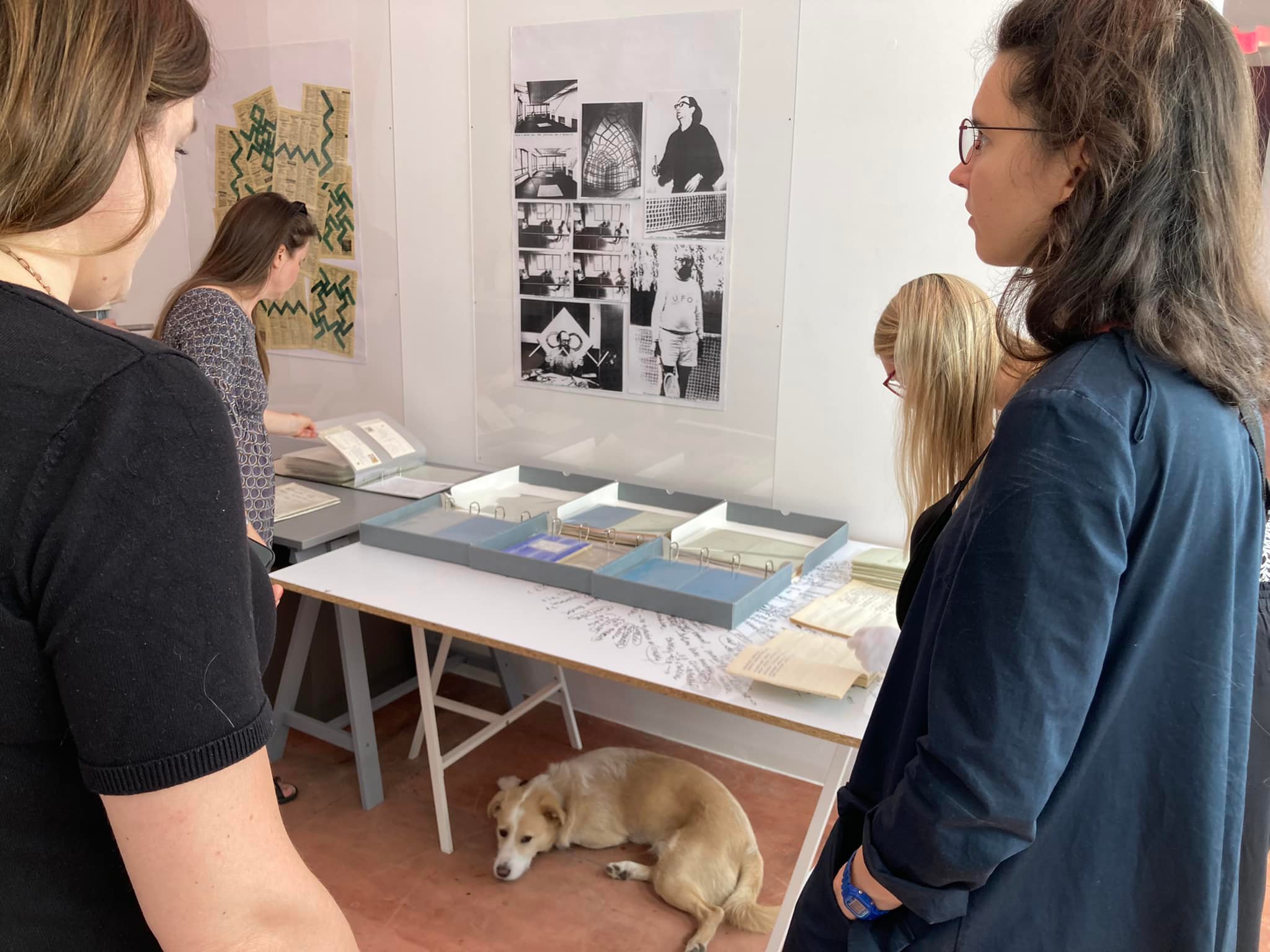 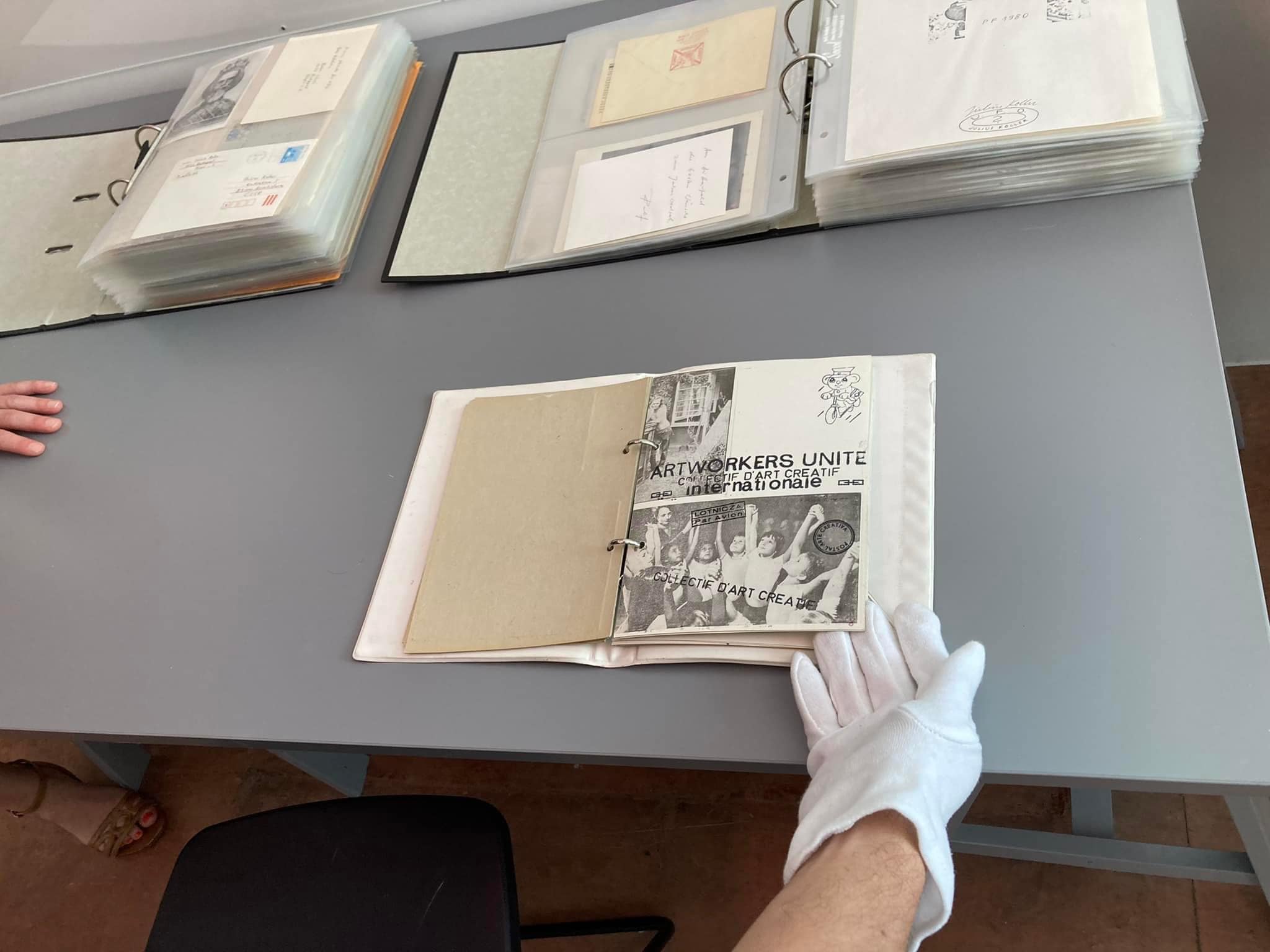 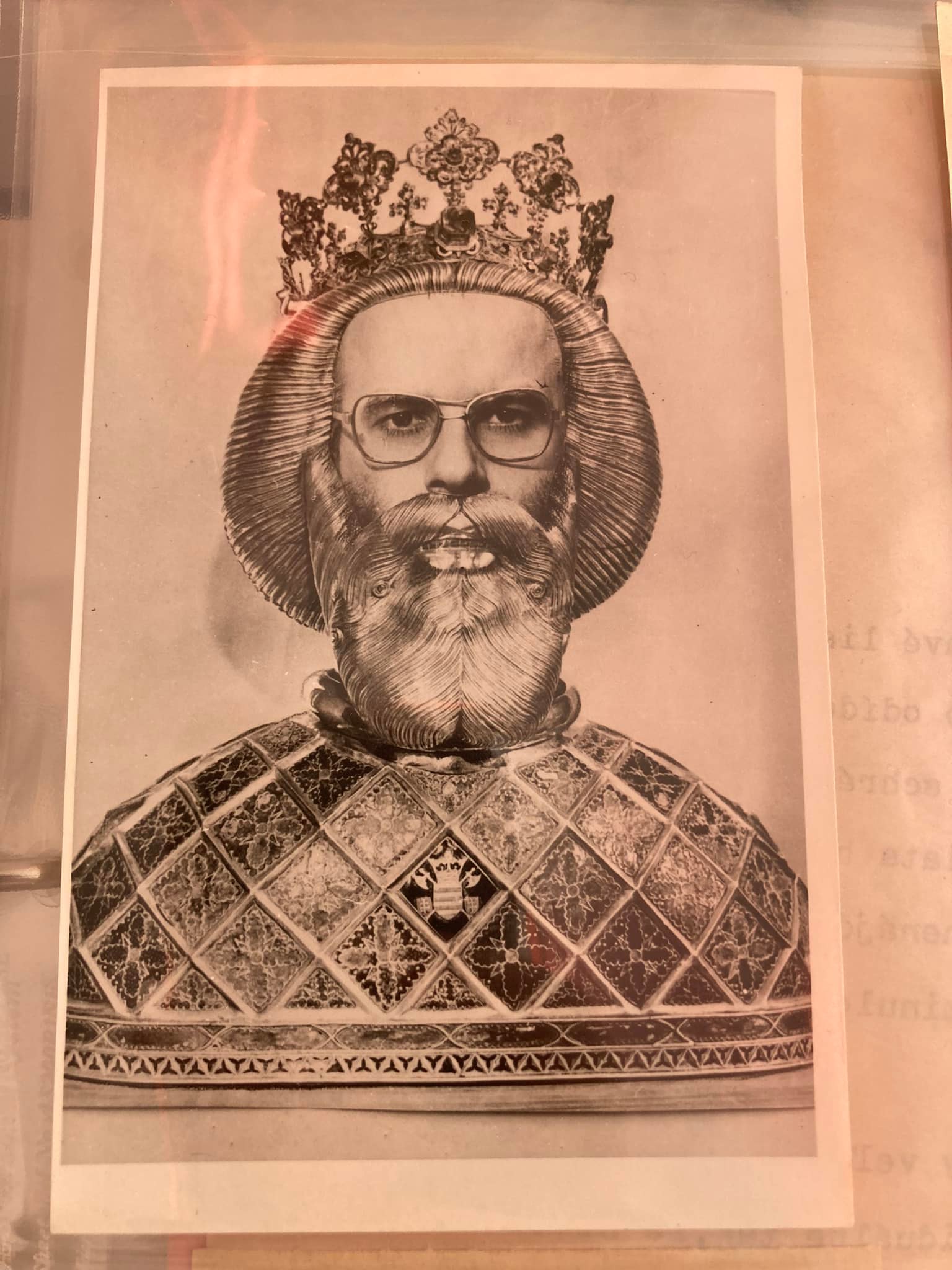 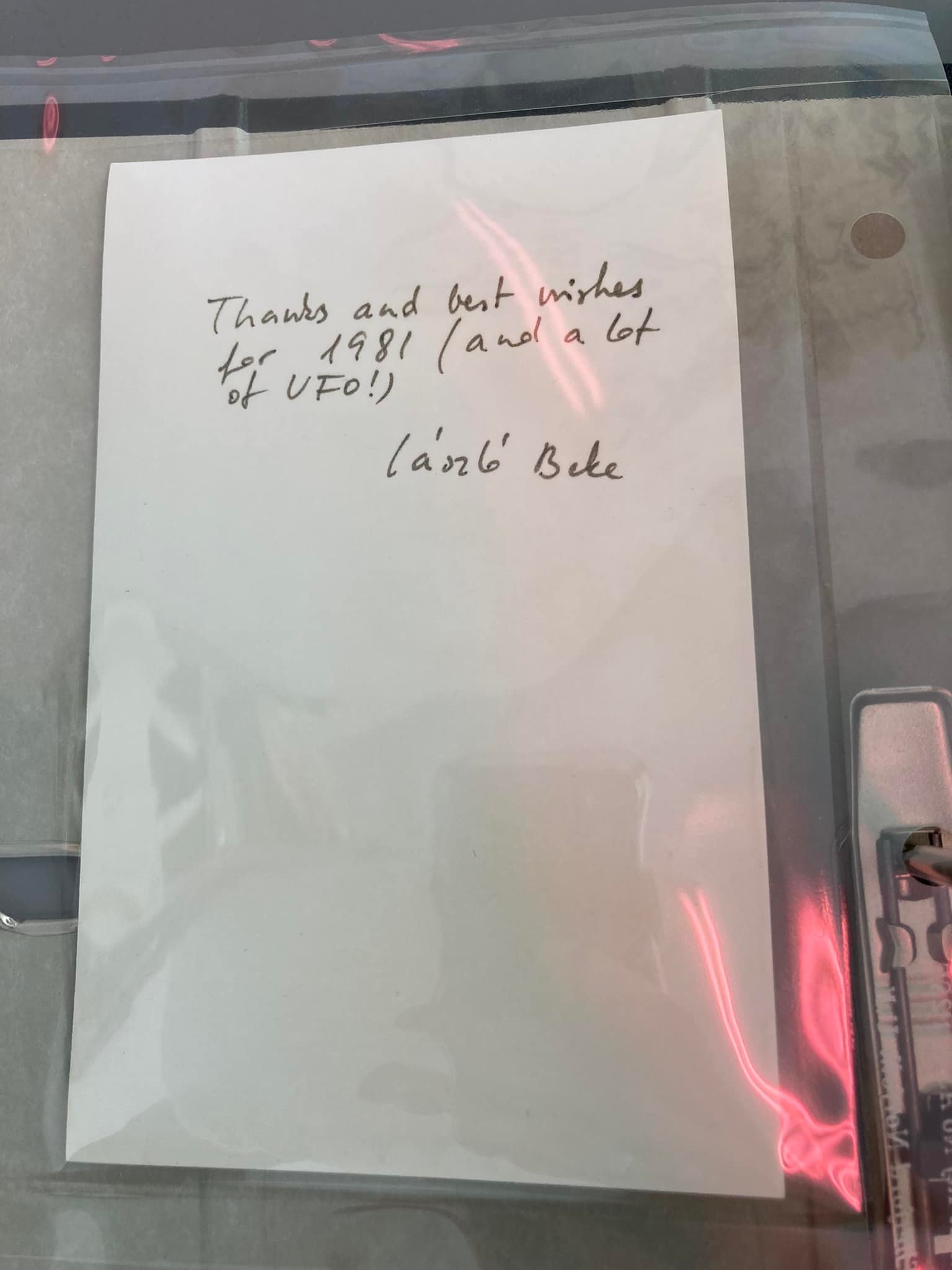 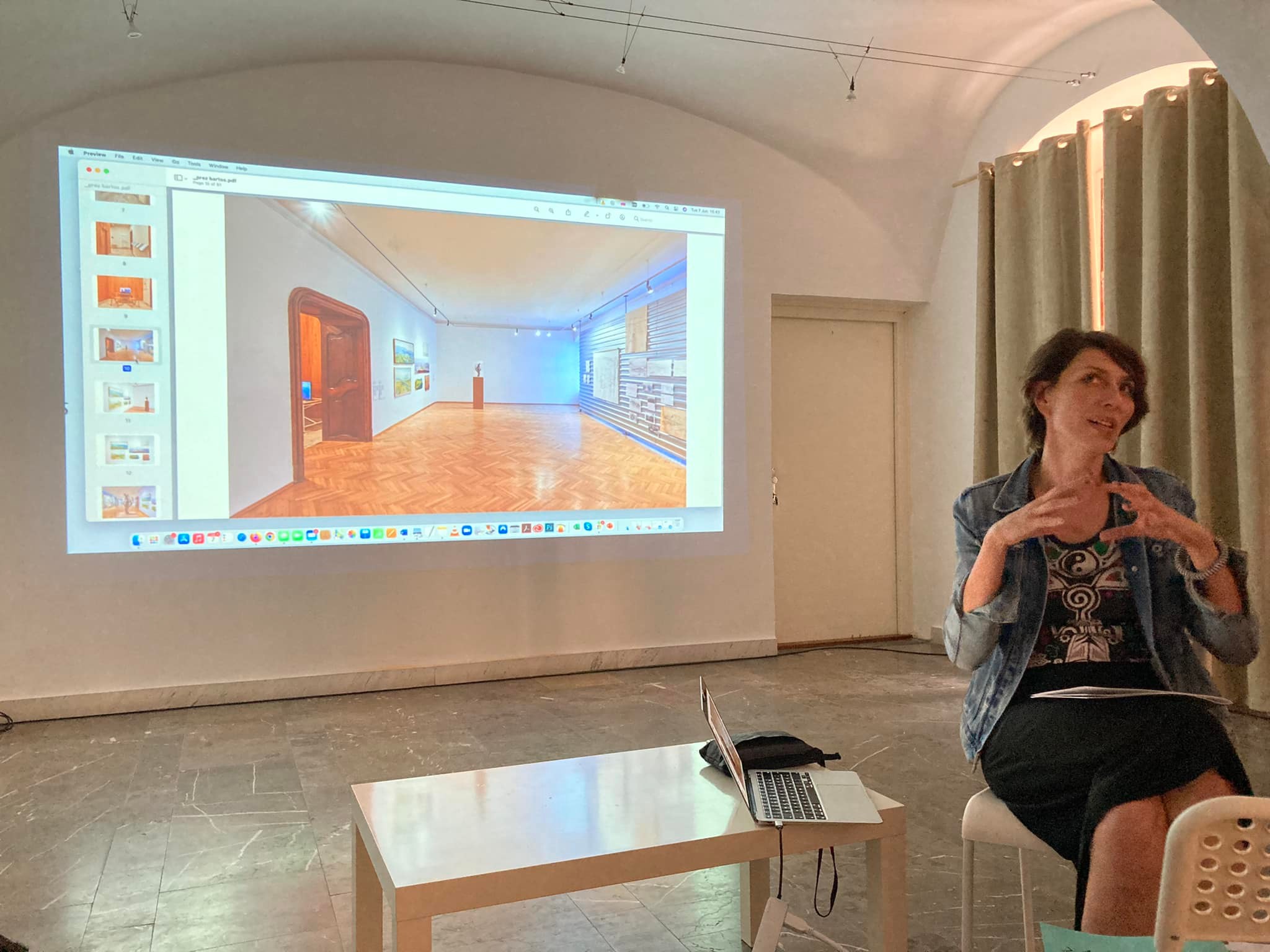 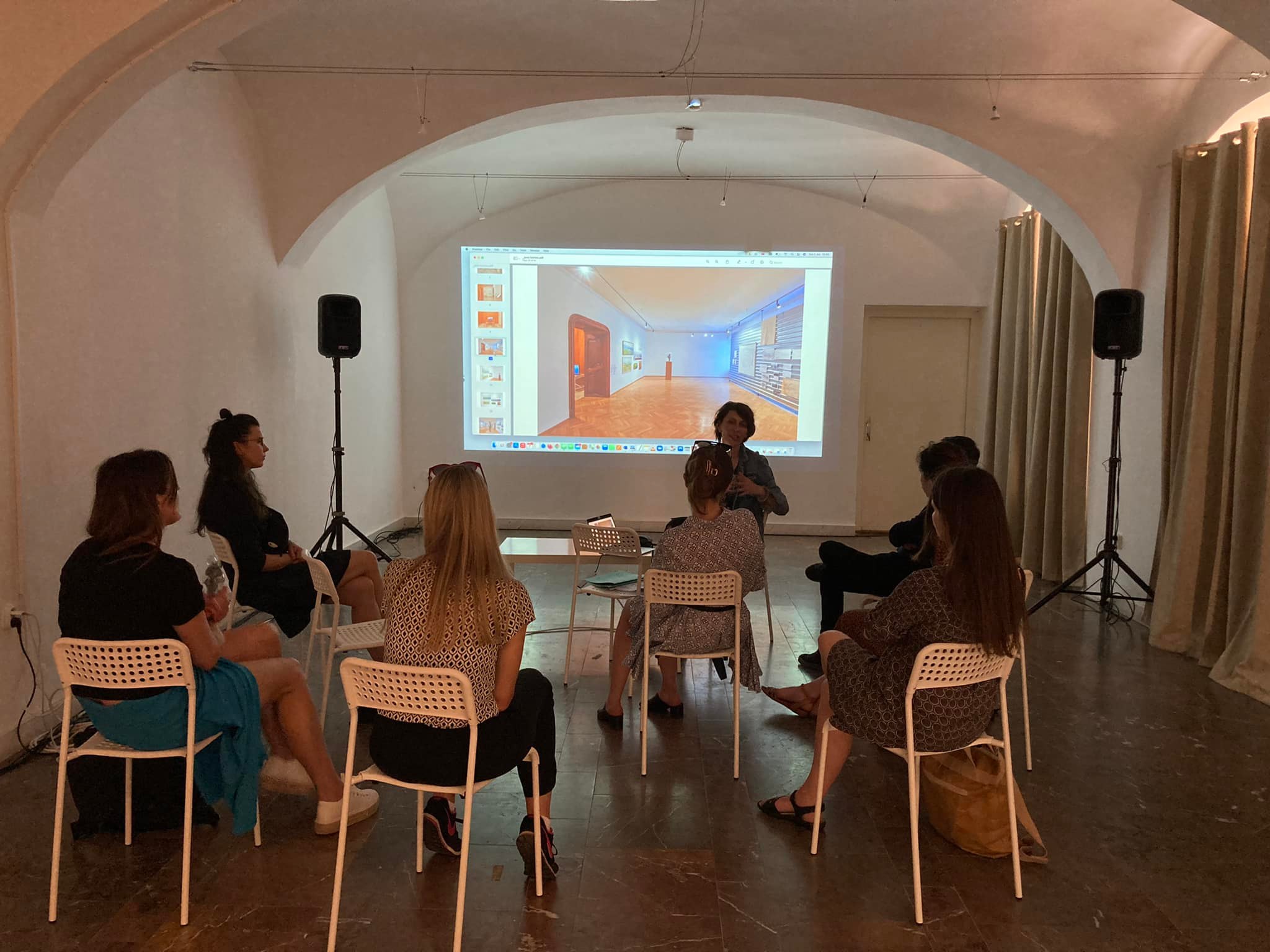 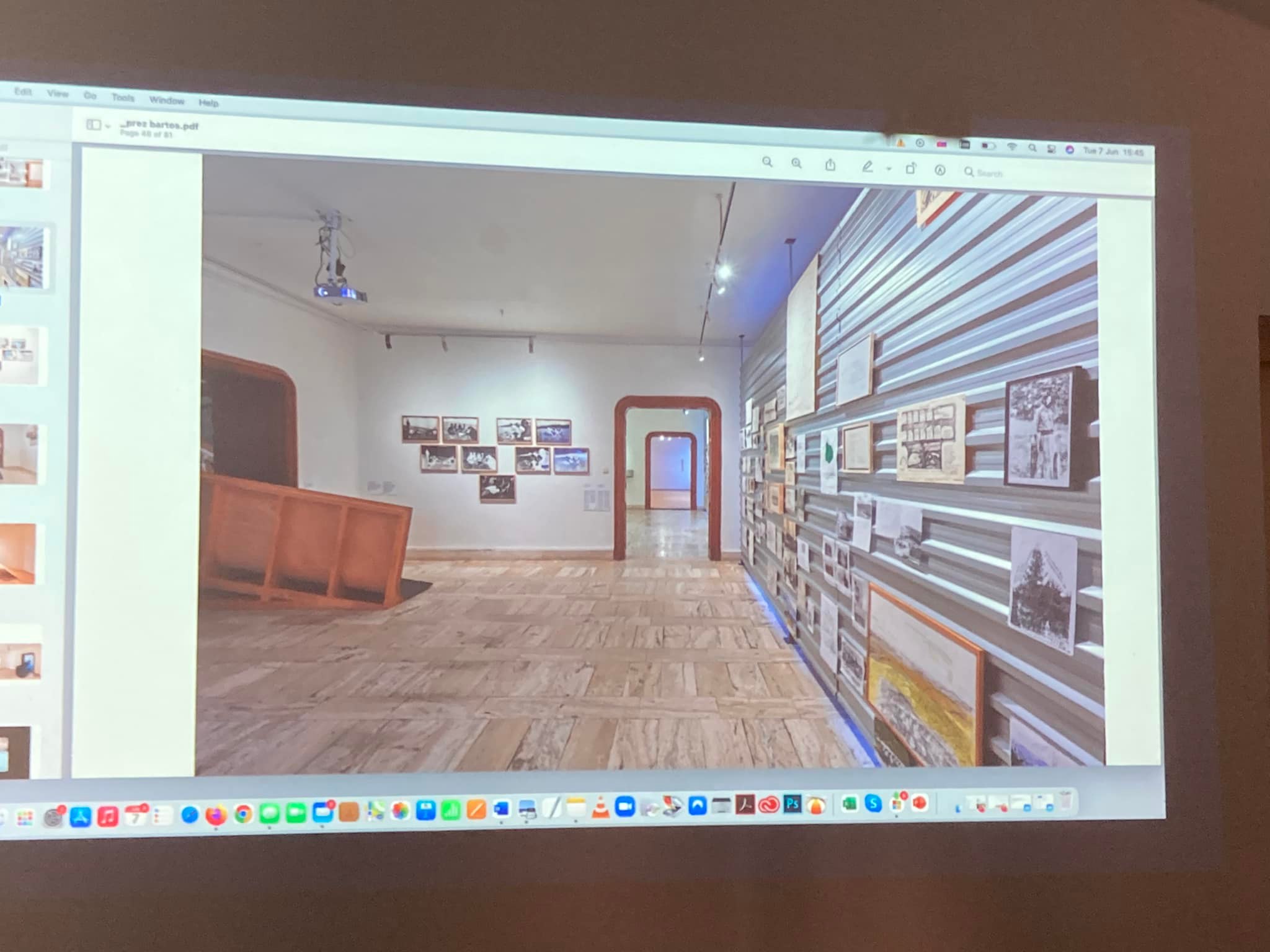 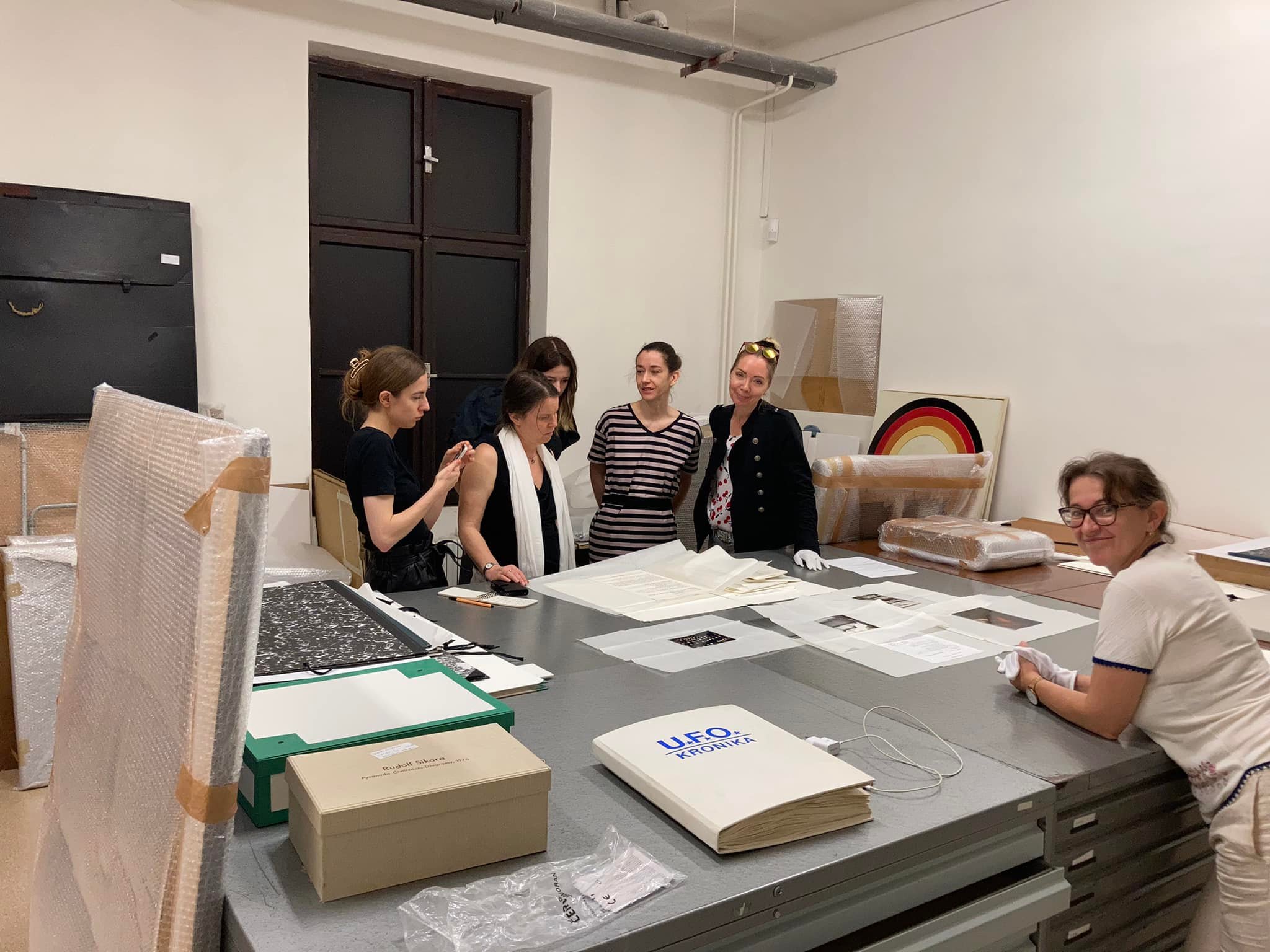 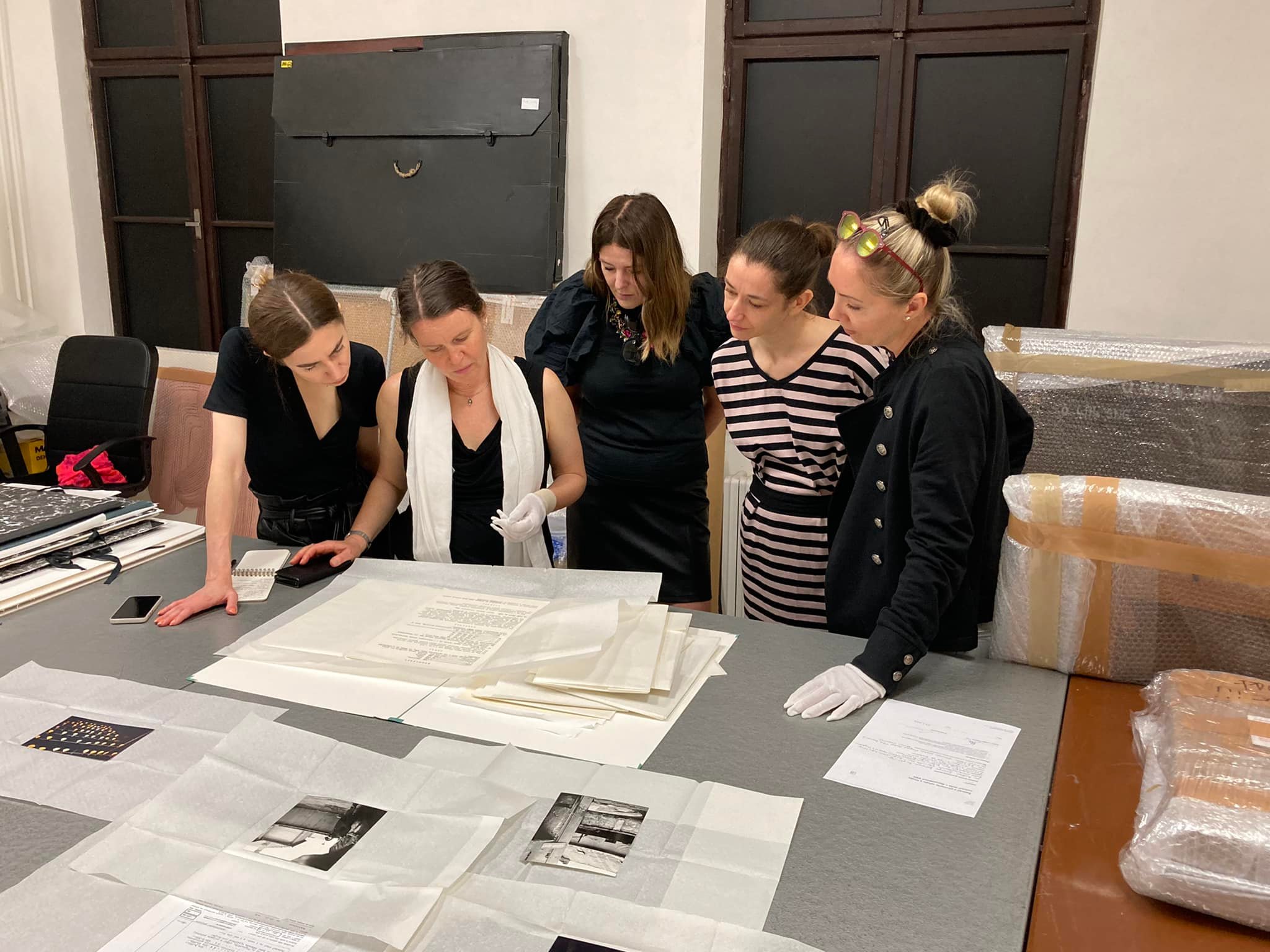